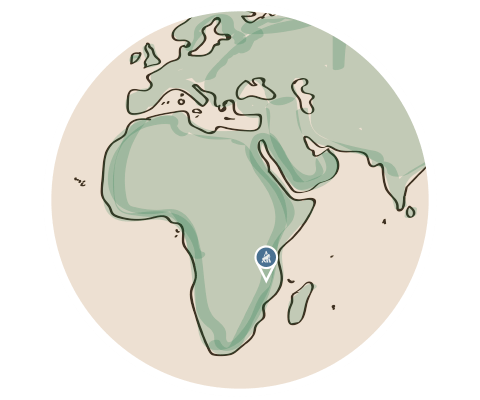 Our Work in Tanzania

Over the past 20 years, we have successfully reintroduced five Eastern Black rhino into South Tanzania. Our rhinos are not only living free, but have given birth in the wild.

Eastern black rhino are the rarest of the three remaining rhino species in Africa. Our position as a world leader in captive breeding has enabled us to release rhinos as part of our Back to the Wild programme. The Aspinall Foundation have successfully had 41 rhino births in 41 years!

We have seen 25 births to our released black rhino in Tanzania and South Africa with a total of over 60 descendants. Which has assisted in boosting the dwindling population of black rhino that are registered as critically endangered in the wild.

Our conservation efforts in Tanzania are focused on preserving the critically endangered Eastern black rhino species, one of the three remaining in Africa. We do this by reintroducing captive-born rhinos in the wild and producing healthy wild offspring where they can live free.

It is estimated there are only about 5,000 black rhinos left in the wild and the Eastern black rhino is the rarest of all. Of the 5,000 only 800 - 1000 are Eastern black. Thanks to our work, since 1996 we were able to foster reproduction maintaining genetic diversity.

1. We've gone a long way since we sent the first Eastern black rhino to South Africa in 1995. The descendants of that male rhino were transferred since then to other areas of Africa such as Tanzania and Rwanda.

2. The Aspinall Foundation has reintroduced in total 8 Eastern black rhino in the wild from Europe, five of which in Tanzania.

3. From the rhinos released back to the wild we have witnessed 25 successful births.

1. The name Rhino comes from 'Rhinoceros' which means "nose horn" referring to the giant horn that grows from their snouts. The reason why rhinos are often victims of illegal pouching is because the horn is still used in traditional folk medicine especially in Asia.

2. There are 5 existing rhino species, two African - black and white - and three Asian - Sumatran, Javan and Indian. Then there are subspecies, like the Eastern black rhino. Black, Sumatran and Javan rhinos are listed by IUCN as ‘critically endangered’ and population in the wild is under threat.

3. The names black rhino and white rhino are actually misleading because their colour is always grey! ‘White’ is the translation of English explorers from the Afrikaans term ‘wyd’ which means wide and was referred to the shape of the rhino lip, while black rhinos have a more pointy lip and were called like this in contrast to white!

4. The eyesight of rhinos is very poor but they have a very strong sense of smell. If you are standing still at a distance of 30m a rhino wouldn’t see you but probably would perceive your presence from your smell.

5. Poaching is one of the greatest threats for rhinos. Their horn is made of keratin, like our fingernails and hair, and it continues to grow during their life. Unfortunately it is so valuable that illegal poachers chase rhinos to cut their horns and most of the times this leaves them to bleed out and die.

The first rhinos in Tanzania

In June 2007 the Aspinall Foundation carried out the first rewilding of a male and female pair of rhinos - Limpopo and Laikipia - from our park at Port Lympne to a reserve based in the Serengeti National Park in Tanzania. This was the first time ever that captive born rhinos were reintroduced into the area.

June 2012 saw the transfer of Grumeti, Zawadi and Monduli, two female and one male rhinos from Port Lympne to the Mkomazi Rhino Sanctuary in Tanzania. Before leaving Port Lympne, the rhinos' diets were gradually changed and they spent time on the African Experience where they mixed with other African wildlife such as zebra, giraffe and wildebeest to get acquainted with their new habitat. Mkomazi is the first sanctuary of its kind in Tanzania.

The Aspinall Foundation has partnered with Grumeti Fund and the Tanzanian government to repopulate a vast area of the Serengeti with critically endangered black rhino. The initiative will see between twelve and seventeen black rhino from wild animal parks around the world released in the wild in a vast but heavily protected ecosystem, in order to introduce a viable population of the magnificent animals, to an area where they have been virtually wiped out.

Black rhinos Grumeti, Zawadi and Monduli received a visit from Prince William at Port Lympne before starting their trip back to the wild to the Mkomazi Reserve in Tanzania in 2012.

Laikipia is a cow (female) black rhino born at Port Lympne and sent back to the wild to Grumeti Reserve in Tanzania in 2007.

Grumeti is a cow (female) black rhino born at Port Lympne and sent back to the wild to the Mkomazi reserve in Tanzania together with Monduli and Zawadi. She gave birth to her first calf Mobo in 2016 and had other another calf in 2019.

Monduli is a bull (male) black rhino born at Port Lympne who went back to the wild to the Mkomazi Rhino Sanctuary in Tanzania in 2012 together with Grumeti and Zawadi.

Zawadi is the third black rhino of the trio who flew from the UK to the Mkomazi Rhino Sanctuary in Tanzania in 2012. Originally born at Berlin Zoo, Zawadi lives today with the rest of the group in Tanzania and had a calf in 2016.